Home > About Us > Meet Our Team

John has been a well known face in the dive scene of this part of the world for longer than most of us can remember! After spending many years working in the dive industry over in Australia, John returned home to his native New Zealand to start Performance Diver way back in 1998!

John loves a deal, and can often be found negotating the next line of Performance Diver products from his office here in our Takapuna store. However, he still enjoys the hands on side of the business and can be found advising customers on their purchases, dive plans or simply sharing some of the knowledge he's built up over such a long time in the industry.

John has more diving qualifications than he can remember and is just as happy bringing home a feed as he is when in the water with 500kg hammerhead sharks. 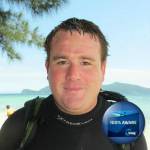 Andy’s diving experience’s initially began snorkelling as a 7 year old hanging on to his father’s spearfishing float line while towed around places like Cape Brett in the Bay of Islands. After he completed a CMAS scuba diving course while at school, Andy got the scuba diving bug and has now been diving for over 20 years.

With a passion for introducing people to the underworld he eventually became a PADI dive instructor and in 2014 a PADI Course Director, PADI’s highest recreational instructor rating.

Andy doesn’t mind catching the odd cray and scallop but is very supportive and protective of the Underwater Environment. Andy has organized underwater clean up dives and is a strong supporter of Project AWARE, being the only 100% Project AWARE Instructor in New Zealand.

If you want to become a PADI Pro Andy is the man to talk to! Andy supervises Performance Diver's Divemaster training and Instructor Development Programmes.

When not blowing bubbles Andy works as the GM Information & Technology for the Selwyn Foundation, who are a non for profit Aged Care organization.

I’m originally from the UK, but have been living  in New Zealand for the last few years. I have two young children, so my week days are spent doing the kindy/school run and getting involved in various other activities with the little ones… Then at the weekends I get to have fun and come to work!
I learnt to dive over 10 yeas ago while travelling in Australia. Since then I have dived in various countries around the world, including sites in The Caribbean, Europe, South East Asia, and well as Australasia. I won't often be found with a catch bag or camera as my pleasure comes from simply being underwater and appreciating the world and life that lies beneath…I just love being under the water! Even if I do complain that it’s pretty cold sometimes!!!
As well as teaching I also work in the shop and I absolutely LOVE my job. I enjoy passing on my skills and knowledge to beginners. I’m constantly learning from my peers and I’m continuing to learn as much about the diving industry as I can.
As well as being a PADI MSDT, I’m also a EFR Instructor and hold a Air Filler Certification